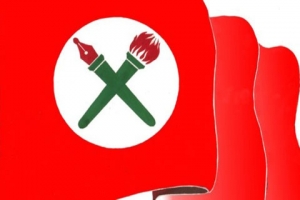 Kathmandu, June 14: Nepal Student Union, the student wing of the Nepali Congress, has officially decided to hold its 11th general convention in Kathmandu in the second week of August this year.
The NSU meeting concluded at party central office, Sanepa, on Tuesday has finalized the date and venue of the general convention.
NSU central member Moti Lal Bhandari shared the information that the meeting has decided to hold its general convention at Bhrikutimandap of Kathmandu on August 7-9.
The meeting has decided to make the upcoming central committee of 151-member and form a task force to recommend the structure of the office-bearers of the student wing.
Currently the NSU led by Ranjit Karna has a 121-member working committee.
The mother party Nepali Congress has entrusted its central member Dr Prakash Sharan Mahat with the responsibility of coordination to hold the general convention of the NSU in the stipulated date.