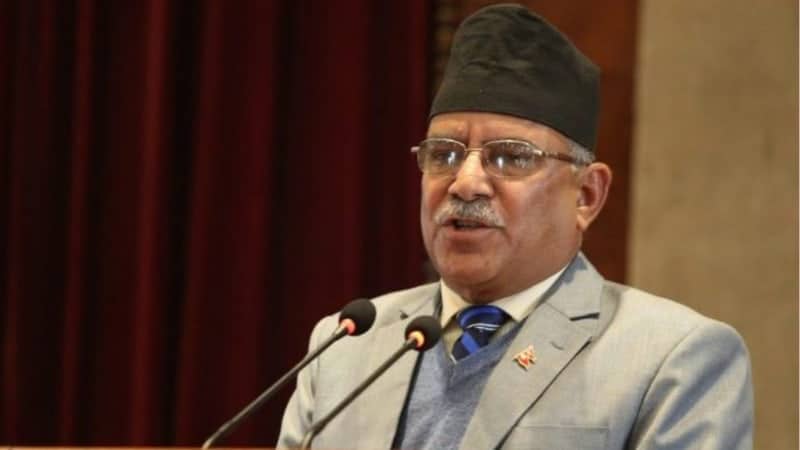 Kathmandu, Sept 19: Prime Minister Pushpa Kamal Dahal Prachanda has said the government was serious toward addressing the grudges of the Madeshi, Tharu and ethnic communities over the constitution through its amendment.

Addressing a special ceremony organised today at the Army Pavilion, Tundikhel on the occasion of the Constitution Day, the Prime Minister said the government was seriously working to make the country’s main law acceptable to all and expedite its enforcement by addressing the voices of the people, unhappy with its some provisions, through fresh amendment(s).

The country marks the first anniversary of the promulgation of the constitution through the Constituent Assembly today.

“No countries in the world have so far achieved a complete constitution in a maiden attempt as the constitution is a dynamic and lively document and gets completion through timely revisions as per the needs of the people,” he said.

The constitution has established Nepal as a Federal Democratic Republic country, guaranteed people’s fundamental rights, periodic elections, press freedom, independent judiciary and the bases for a rule of law with paving the way for the achievement of social justice, durable peace, good governance, development and progress, he said.

Stating that the adoption of a decentralized and federal governance system was one of the major achievements of the constitution, the PM said it had conceptualized the establishment of a federal ruling system being based on the principles of cooperation, co-existence and collaboration .

He added that Nepal’s constitution was advanced in terms of people’s fundamental rights, principle of inclusion and identity and decentralization of power; and it had attempted its best to take the people to power by defining the people-state relations through a new dimension.

“Nepal’s constitution had to be promulgated in a special hour of the history and some of the genuine demands of the Madhesi, Tharu and ethnic people and their aspirations are yet to be met,” he said.

On the occasion, PM Prachanda said the government had already formed a high-level commission to probe the incidents of violence that took place during the Tarai-Madhes movement, had already announced those killed in the movement martyrs and a process was going on to provide compensation to the victims’ families and medical treatment cost to the injured. Likewise, the withdrawal of political cases relating to the agitation was afoot.

Reiterating the government commitments to holding all elections within the stipulated time (by mid-January, 2018), PM Prachanda called for unity and cooperation among the political parties for the same.

The PM argued that holding the new constitution-mandated local bodies’ election, provincial level and parliamentary elections would be a milestone in the process of enforcing the new national charter and institutionalise the federalism.

Furthermore, the PM reaffirmed the commitment of government towards the formulation of new acts and rules to bring into effect the new national statute.

He also hailed the government’s decision regarding the formation of high courts as an important achievement in the process of implementation of new constitution and federalism.

PM Prachanda also mentioned of the government’s willingness to wrap up the determination of local bodies’ unit at the earliest.

On the occasion, PM Prachanda urged all the state organs and people from all walks of life to be responsible and patient at the juncture of time when the country has entered a new phase. “It is our prime duties to pave a path to achieve the goals mandated by the new constitution.”

On the occasion, he shared that the government, had already forwarded the process to honour those people and organizations who contributed in various capacities for the promulgation of the new constitution.