Speaking at a programme organised in front of Ratna Rajya Laxmi Campus in the Exhibition Road in Kathmandu today to inaugurate the campaign, the participants said that the market would be inspected strictly and those found promoting and involving in the illegal practice would be booked as part of the drive. 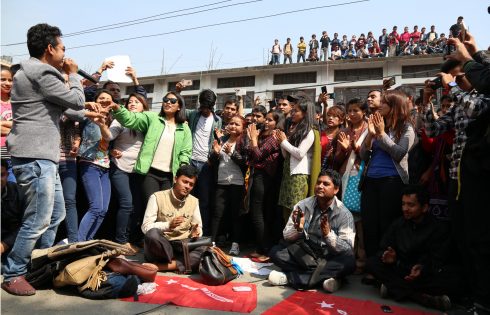 On the occasion, President of the Federation of Nepali Journalists Dr Mahendra Bista said that the market is still witnessing a short of the supply of petroleum products and cooking gas even after the border blockade ended, while the government is acting as a mute spectator to the problem.

Likewise, UML’s youth wing Youth Association Nepal Chairman Rajib Pahari and rights activists Subodh Pyakurel and Jyoti Baniya among others stressed the need for the government to make government employees active to control black marketeering, while consumers themselves should adopt the ways of being aware such as checking pricelist of goods in purchasing goods.

The participants said that they will put pressure on the Nepal Oil Corporations (NOC) to revise fuel price in line with international price and efforts would be made to press for decreasing transport fairs that increased under the grounds of a shortage of petroleum products previously.

He also said that the government sector would be given authority to smoothen the supply of petroleum products.